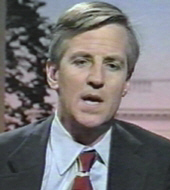 Right or wrong, we bash away! That could be the Democrat motto of the Ot years (can't say it's the 90's or whatever, so Ot years will have to do).

Their political strategy is to oppose, accuse and berate the conservative agenda, personified in the person of George Bush. It's not victory against America's enemies, but victory against their political opponents, it's the accrual (grammar?) of power for power's sake. I guess you could call it being "power whores."

That's the evil of being a liberal leader in America today. That's why I despise my own senior senator here in Nevada. Harry Reid, the magic man of local land deals, has sold his political soul to the liberal machine. He is but a politically evil mouthpiece of the soulless liberal left.

Alas, he is in position to do such good, too.

Well, not to worry overmuch. The American people are largely conservative in their beliefs. We just have to keep pressing on to gain more ground and let us ourselves be dismayed at the tactics and corruption of our liberal benefactors.

Here's a quote I can't resist regarding all this Demo brouhaha:
“[F]inger pointing isn’t the same thing as soul searching.” —W. James Antle III
Posted by Tim at 10:15 AM

What a perfect quote! :-D