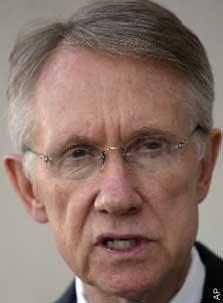 
The story begs the question. Should Reid stay in office as word of another ethics lapse reaches our ears?

Well, the facts are coming to light. Reid failed to disclose land interests he had which were later benefited by legislation he passed in Congress. To the tune of $700,000. Hmmm, public office has its benefits.

Another question: What other Senators, especially Democrats, knew of his secret land deal and did they cover up for their leader?

Ed Morrissey, the blogger responsible for Captain's Quarters has an article in the New York Post online, says that Reid hid his interests in Clark County real estate that later benefited from federal legislation he passed. Here's a quote-

Normally, the government would have to sell this land at auction, as land swaps had lost the federal government millions in southern Nevada. But Reid insisted on suspending that rule in his Clark County act. The developers that hired his sons as lobbyists prospered with the lower-cost acquisitions of prime real estate through the uneven swaps. Also in the money were those - like Harry Reid himself - who'd already invested money in Clark County real estate.

This makes me wonder, if Reid doesn't resign over this land scandal shouldn't he at least return the $700,000 in profits he unethically obtained? And what other land deals has he participated in which he received ill-gotten gains?

H/T to the Anchoress.

Update: Harry Reid is my senator here in Nevada.
Posted by Tim at 3:26 PM